In the fourth and final part of our series on forex trading with candlestick charts, we’ll be showing you how to recognise and interpret four potential reversal indicators with long shadows, and also how to blend two or more candlesticks into one.

There are two pairs of single candlestick reversal patterns that feature small real bodies, one short or non-existent shadow, and one long shadow that is at least twice the length of the real body. The first of these pairs is known as Hammer and Hanging Man, and the second is known as Inverted Hammer and Shooting Star. The classification is determined by the preceding price action and the location of the long shadow.

The first pair, Hammer and Hanging Man, have identical candlesticks with small bodies and long lower shadows, and the second pair, Shooting Star and Inverted Hammer, have identical candlesticks with small bodies and long upper shadows. To determine whether these are bullish or bearish patterns, you need to consider the preceding price action and wait for further confirmation from the next candlestick. In general, the Hammer and Inverted Hammer are formed after a decline, and are usually considered to be bullish reversal patterns, while the Shooting Star and Hanging Man tend to form after an advance and can be considered bearish reversal patterns.

The Hammer and Hanging Man are identical formations, and their classification is entirely dependent on the prior price action. The only difference is that a Hammer forms after a decline, whereas a Hanging Man forms after an advance. Both formations feature small real bodies that can be hollow or filled, short or non-existent upper shadows, and long lower shadows that are at least double the length of the real body. Like most single and double candlestick formations, they require confirmation before it can be determined whether they are bearish or bullish indicators.

Hammers are bullish reversal patterns that follow a decline. They can indicate a potential trend reversal, support levels, or bottoms. They can signify the beginning of a bullish revival after a decline, with the strong finish indicating that buyers ended the session having regained control of price action. Although this may seem enough to act upon, they require further bullish confirmation, as the low of the hammer indicates that there are still plenty of sellers in the market, and evidence of further buying pressure and preferably expanding volume is required before acting on this signal. This confirmation could come in the form of a gap up or a long hollow candlestick. Hammers often represent the climax of a sell-off, and the validity of the reversal can be reinforced by a marked increase in volume.

A Hanging Man is a bearish reversal pattern that can signify a resistance level or top. Following an advance, a Hanging Man is a sign that selling pressure is beginning to increase. The long lower shadow shows that the price was pushed lower by sellers during the session, before buyers pushed the price higher by the close. Like the Hammer, the Hanging Man needs confirmation, in the form of a gap down or a long filled candlestick with a high trading volume, before it can be acted upon.

The Inverted Hammer and Shooting Star are identical when viewed in isolation, and like the Hammer and Hanging Man, their classification depends on the preceding price action. Both have small real bodies, which can be hollow or filled, small or non-existent lower shadows, and long upper shadows. They can indicate a potential trend reversal, but require confirmation before you can act on them.

A Shooting Star is a bearish reversal pattern that forms in the star position after an advance. It can mark a potential resistance level, or a reversal of trend, and forms when prices gap higher on the open, advance during the session, but close much lower than the intra-session highs. The candlestick that results features a long upper shadow and a small hollow or filled body. Following a big advance, the ability of sellers to force prices down indicates that a change of direction may be on the way. A long upper shadow – at least twice the length of the real body – indicates a substantial reversal, but bearish confirmation in the form of a gap down or a long filled candlestick with high volume is needed before it can be acted upon.

An Inverted Hammer taken in isolation looks identical to a Shooting Star, with the only difference being that it follows a decline or downtrend. These indicate a potential support level or a trend reversal, but forms after a decline or downtrend. Following a decline, the long upper shadow shows that there was a lot of buying pressure during the session, and that buyers could not sustain this buying pressure throughout the session and prices closed a fair bit down from the intra-session highs. The failure to sustain buying pressure means that bullish confirmation in the form of a gap up or a long hollow candlestick with high volume is required before action. 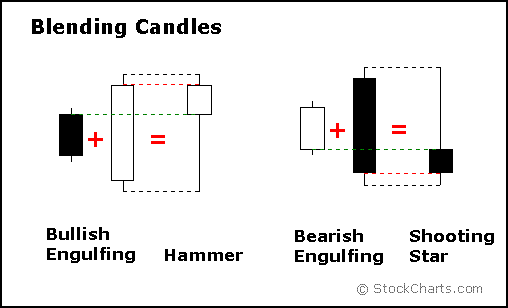 Using these three together to create a new candlestick covering a longer time frame, a Bullish Engulfing Pattern or a Piercing Pattern will be transformed into a Hammer. The Hammer’s long lower shadow indicates a potential bullish reversal which requires bullish confirmation before action. 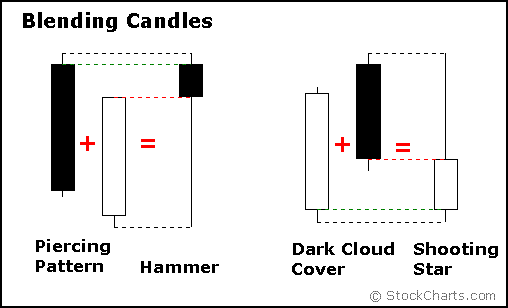 When the candlesticks of a Dark Cloud Cover Pattern or a Bearish Engulfing Pattern are blended, a Shooting Star is created. The Shooting Star’s long upper shadow indicates a potential bearish reversal which would require bearish confirmation before acting upon it. 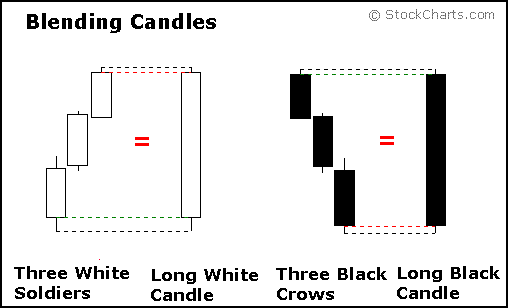 While we have concentrated on blending two candlesticks here, you can blend three or more using the same technique – use the open from the first, the close from the last, and the high and low of the pattern. For example, blending Three White Soldiers creates a long hollow candlestick, whereas Three Black Crows will blend into a long filled candlestick.