Fault lines in the Euro have once again been exposed by problems in the Eurozone’s periphery. The one positive read the longs can take from such episodes is that they usually spur the deeper integration they have been calling for, so longer-term this could be bullish for the Euro.

During the Summer of last year it was a similar much more intense episode, which saw the European Central Bank pledge to do whatever it takes to save the Euro. In effect, the Eurozone tends to act under duress and the union’s history is one of integration driven by crises.

The latest wave of uncertainty stems from political uncertainty in Italy and Spain, which rattled investors’ nerves on Monday sending equities, peripheral Eurozone bonds and the Euro lower over fears economic reforms would be stalled. It remains to be seen if these domestic political spats escalate and once again put the EUR under pressure. 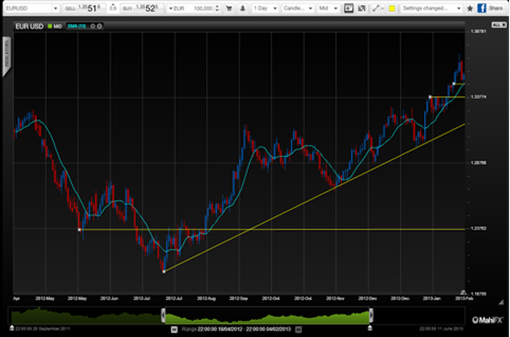 But at least this time around the ECB is actually ready to intervene and stabilise Eurozone markets. Besides there will be enormous pressure from other Eurozone countries for Spanish and Italian politicians to present a unified face if problems were to escalate.

Overall since the ECB’s dramatic verbal intervention in July last year, the Euro has behaved like a currency wanting to push higher and has a number of positive factors going for it. For starters, the Eurozone has a healthy current account surplus, which rose to EUR 12.6 billion in November from EUR 10.2 billion in October.

Though the ECB has provided tremendous liquidity to the Eurozone’s struggling banking system, it has so far sterilised its purchases of Eurozone sovereign bonds – that is mop up the extra liquidity created. It has also suggested that if it’s Outright Monetary Transaction programme is called upon to support peripheral Eurozone bond markets, which also comes with strict conditions for applicants, it would seek to sterilise those purchases as well.

This looks like a more conservative approach to monetary policy than that practiced by the US Federal Reserve, Bank of England and Bank of Japan, which have been deliberately flooding their financial systems through aggressive quantitative easing.

But there’s more. Holders of USD are growing concerned  over it’s debasement and are openly talking of finding alternative stores of wealth. There’s also a growing trend for countries to sign bilateral trade deals, which exclude USD as the transaction currency. The USD is still by far the world’s main reserve currency accounting for over 60% of identified reserves, but that’s compared with 71% in 2000.

Should the Eurozone’s authorities manage to sustainably stabilise its internal economic strains and rediscover broad-based GDP growth, the EUR could be set to eventually challenge the USD’s top spot and play host to the growing number of countries around the world, which are keen to diversify their reserves. It’s also noteworthy that the ECB has so far been absent from the currency wars – a way of telling the markets that someone out there still believes in a hard currency? More clues on the ECB’s attitude to the strength of the EUR could be revealed at its Thursday press conference.

Heading for multi-polar forex world?
Though European politicians have been sounding off recently over EUR strength, they can’t tell the ECB what to do and because of its Bundesbank-inspired mandate, it’s actually relatively more independent than many other central banks.

Therefore a good strategy could be to look to go long on EUR/USD or EUR/GBP on politically motivated set-backs, particularly as some sort of resolution emerges. The foundations of the EUR are gradually being put in place, but in the short term it now has a central bank prepared to defend it.

Going further out forex markets appear to be moving towards a multi-polar world of reserve currencies where the USD, EUR and eventually the CNY, if and when China allows it to freely float, will hold similar weightings. Should that trend play out, and there’s no guarantee it will, that would potentially represent a bearish influence on USD, but a positive one for EUR and CNY.
Follow MahiFX on twitter at: https://twitter.com/MahiForex and on facebook https://en-gb.facebook.com/mahifx