The US dollar suffered its worst week since 2011, as the Federal Reserve issued a cautious rate statement and summary of economic projections, casting doubts about the pace and timing of rate normalization. Several market moving events will take place in the coming week, headlined by CPI inflation.

The US dollar index, a trade-weighted average of the dollar against a basket of six currencies, tumbled 1.3 percent on Friday to close at 97.80. It had surpassed the 100.00 mark in the previous week, climbing to its highest level in 12 years.

The National Association of Realtors will release existing home sales for February. Housing activity suffered a setback last month, as severe cold swept through much of the country. Nonetheless, existing home sales are forecast to rise 1.8 percent, according to a median estimate of economists.

The Commerce Department will probably show a further drop in national CPI on Tuesday, thanks to volatile energy prices. The consumer price index of goods and services is forecast to drop 0.1 percent annually, compared to a similar decline the previous month.

Separately, the Commerce Department will issue a report on new home sales. The sale of new homes is forecast to fall to a seasonally adjusted annual rate of 470,000 in February from 481,000 the previous month.

The US government will post revised estimates of fourth quarter GDP. Economic growth slowed considerably in the final stretch of the year, growing at an annualized rate of 2.2 percent, according to revised estimates released last month. The economy had posted its strongest back-to-back quarters of growth in more than a decade in Q2 and Q3.

The greenback still carries a favourable outlook, with analysts pricing fair market value for the dollar index right around the 100.0 mark. The dollar will probably experience a broad consolidation trend in the early part of the week. Upbeat economic data will raise bets that the Fed is not as patient as it claims to be, boosting expectations for multiple rate hikes this year.

Nomura partners with Gold-i to expand its reach to the retail... 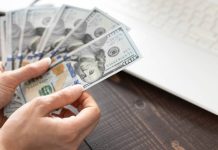