One of the biggest problems that people encounter when using the Fibonacci tool is deciding which Swing Low and Swing High points to use for setting the levels. Traders can look at charts differently, using different time frames, and this can lead them to draw different conclusions.

Basically, there is no concrete ‘right’ or ‘wrong’ way to set these levels, especially when the trend isn’t 100% clear. Although there will always be a degree of guesswork involved, you can clarify things a little by using other tools in conjunction with Fibonacci levels to arrive at more educated guesses. In the third part of our series, we shall be looking at how to combine Fibonacci with candlestick patterns and other forms of support and resistance to achieve more accurate analyses.

Combining Fibonacci with Support and Resistance

One way in which you can use the Fibonacci tool is to compare the retracement levels with potential support and resistance levels you have identified to see how well they match up.

If they do indeed match up, and you combine them with other common price areas, then there is a much better chance that the price will bounce from these areas.Let’s look at an example to illustrate this point: 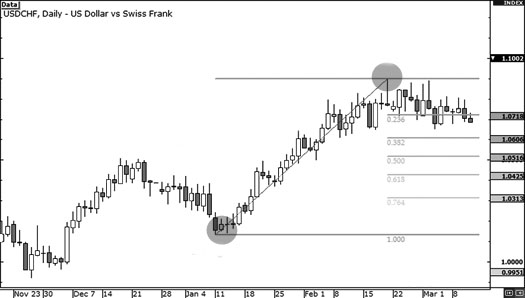 From looking at the chart above, you see a clear uptrend, and you decide that you want to enter a long trade to capitalise on it.

In order to decide where to enter this trade, you use the Fibonacci tool setting the Swing Low at January 11th’s 1.0132 and the Swing High at February 19th’s 1.0899. 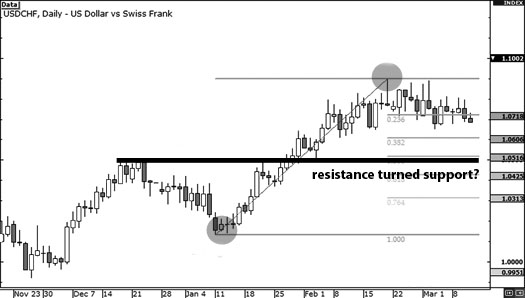 Looking back, you notice that the 1.0510 served as an area of resistance in the past, and that it roughly lines up with the 50% Fibonacci retracement level. Now that the price has broken through this level, it could well turn into a support level, making it a suitable position for your entry order. 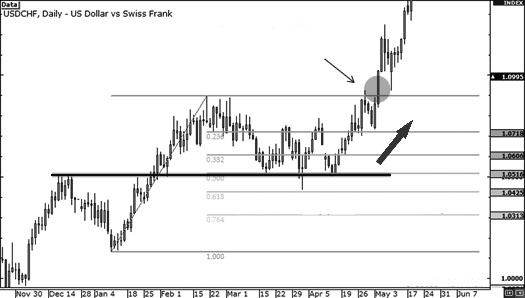 In this case, the resistance did indeed turn into a support, which was tested several times but couldn’t be broken. After a few tests of support, the price broke beyond its former high, continuing the uptrend. So, if you had placed your entry order at the 50% Fibonacci level, you would have maximised your profits on this trade. You would, however, have had to hold your nerve, especially at the point of the second test of the new support level.

The same principle applies in a downtrend. Basically, in order to select an appropriate entry order using this technique, you need to look for past price levels that have served as support or resistance that match up with the Fibonacci levels, as there is a higher chance of the price bouncing from these areas.

Why does this work?

While there is no guarantee that the price will bounce from these levels, there is a better chance that it will, due to the strength-in-numbers effect. As with any other trade, it is best to be selective when choosing to make a trade based on this type of analysis. If you only place trade orders when all the variables (such as the Swing High and Swing Low points, the support or resistance level, and the alignment between these and the Fibonacci levels) are quite clearly defined, your chances of success over the long term will be increased significantly.

In the next installment of our guide to the Fibonacci tool, we’ll be looking at how to use it in combination with trend lines.