– Xcad Network emerges from Xcademy the e-learning portal with over 80,000 users –

Xcad Network, the platform that provides people with the tools to become successful content creators across YouTube and other social media channels, is pleased to announce that it has raised $3,900,000 (£2,800,000) in a private round, led by blockchain technology and venture builder Zilliqa. Following high demand from investors that included venture capital firms LD Capital, Genesis Block Ventures and AU21 Capital, the funding was capped at a valuation of $20 million (£14.5 million). Funds were also raised by the DAO Maker launchpad where registrations for a single project reached a record high on the platform.

The capital will be used to build a DeFi plugin for YouTube, allowing content creators to tokenize themselves and earn rewards from their content, while also enabling viewers to earn rewards from watching videos and engaging with the content. A new NFT marketplace will also be built allowing content creators to make their own NFTs in one click, which can then be traded.

Oliver Bell, CEO and co-founder of Xcad Network, said of the new platform:

“The unprecedented interest from investors, YouTubers and our community shows that the Xcad Network will see considerable demand from content creators and viewers of content, as it monetizes people’s usage by rewarding their engagement.

“This is an exciting step in Xcad’s journey to becoming an integral part of YouTube that will allow YouTubers to monetize their content above and beyond what they can already do. By creating an environment where both content creators and viewers can monetize their engagement, we expect to see an explosion of activity from both new aspiring YouTubers as well as established ones.”

What are the new enhancements to the platform?

The new enhancements will allow for greater engagement amongst YouTubers and their viewers, with the ability to monetize activity via a tokenized economy that rewards users for popular content and viewer loyalty. The YouTubers will become part of an ecosystem that will reward content creators according to various criteria such as subscriber size, views and watch time. NTFs will also become an integral part of the ecosystem, allowing users to create unique memorabilia that people can buy and trade amongst each other.

How does it work? 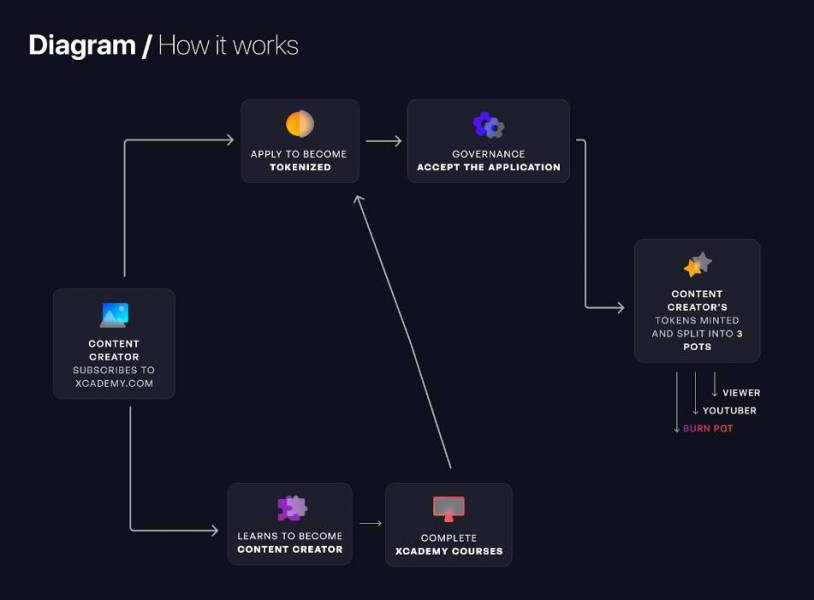 The Xcad Network technology will act as a plugin for YouTube users and monetization will be powered by the DeFi ecosystem’s XCAD token.

When a YouTuber joins the Xcad Network, which is achieved by applying to Xcad Network’s governance portal, a fixed amount of creator tokens will be minted and a portion of the tokens are assigned to the creator and vested until they hit performance milestones.

Joel Morris, co-founder of Xcad Network and a YouTuber with over 2.5 million subscribers said:

“As a YouTuber myself, I know how inconsistent monetization can be. Due to being at the mercy of advertisers and YouTube itself, earnings can dramatically change month on month. Xcad Network provides a clear roadmap and is something content creators can rely upon, providing their performance hits their milestones. The benefits to watch time and increasing engagement and loyalty of viewers, makes it a win-win for creators and viewers.”

A portion of these tokens can be earned by viewers by watching and engaging with content on YouTube, without any changes to their existing workflow. The tokens will be tradable for other YouTuber tokens and can also be used to buy and sell NFTs and merchandise, stake their rewards to earn more or convert them back to fiat currencies such as dollars, euros or pounds sterling. Token holders will also be empowered to vote on future content, video ideas and other key decisions involving a YouTuber’s channel.

A Unique NFT Marketplace of Creators

YouTubers will be able to create unique NFTs for users to buy and collect, which they can sell on to other users if they wish. The buying and selling of these NFTs will be possible in fiat currencies (dollar, euro, sterling) as well as cryptocurrency. Once the initial price is set by the creator, from then on the prices are determined purely by supply and demand. This marketplace will also allow creators to earn a passive income every time an NFT is traded.

Both the Xcad Network co-founders Oliver Bell and Joel Morris are available for comment or interview.