As the weather conditions heat up across the United States, natural gas prices have been the key beneficiary from the record high temperatures felt across the American southwest. After multiple warnings from the National Weather Service, natural gas prices have managed to climb to the highest levels since September of 2015 amid the heat wave that can make it potentially lethal to be outside. As a result of the temperatures, higher than average power demand is helping to kill the glut in natural gas that has seen inventories remain above the highest levels seen over the last 5-years. However, with higher prices, production might start to climb once more as rising imports help to satisfy growing demand over the near-term. Even though demand is still not enough to overtake supply, should prices remain elevated, conditions that drove natural gas lower of the years could quickly make a comeback.

Gas prices have continued their recent climb following a brief correction on the back of the record high temperatures being felt across the American southwest and Great Plains. As the temperatures climbs, demand from utilities has risen to the occasion to fill the surging cooling needs from households and businesses in the affected region. According to the National Weather Service, hot weather is expected to taper through the end of the week, however, temperatures will remain elevated above seasonal averages and endure near record levels. These developments will remain front and center for the gas market in the coming week, keeping upward pressure on prices until a cooler front moves in following these unseasonably warm conditions. In spite of a 1-year return of -17.98%, gas prices have snapped a considerable losing streak, climbing out of the bear market that overcame prices after surging 70.45% from the February lows.

However, despite prices have serious upside momentum, there are emergent factors that could see prices come back down just as quickly as they rose. For one, rising prices hearken to higher production levels as evidenced by the latest Baker Hughes data which shows gas drill rigs rising to 86 from 85 the week prior as of June 17th. While power demand is at 2016 highs according to the data, supply has not slackened significantly. According to the Energy Information Administration figures through the 15th, marketed and dry production were similar to levels a week prior despite being modestly lower than a year prior, with the main gains coming from Canadian imports. As a result, total supply is actually slightly higher than a year earlier, at 79.9 billion cubic feet per day versus 79.2 during the same period a year ago.

Aside from rising production as a consequence of higher prices which could derail recent gains in prices is demand side of the equation. Data compiled by Bloomberg shows that deliveries to utilities responsible for electricity generation is expected to reach 34.3 billion cubic feet on June 20th, marking the highest levels year-to-date. Even though hot temperatures are expected to sweep across the continental US for the remainder of the month, peak demand is not anticipated to occur until later in the summer, meaning that prices might be even higher on a temporary basis until the heat wave subsides. However, tackling the ongoing inventory glut remains a concern, with the 3.041 trillion cubic feet currently in storage, nearly 30.00% more than average for this time of year, remaining a substantial obstacle to sustained momentum higher in gas prices.

From a technical perspective, the breakout higher above the key former resistance sitting at $2.480 per MMBtu paves the way for substantially more upside in natural gas prices despite the possibility of a near-term correction before the resumption of momentum higher. One of the more bullish indicators suggesting further upside in the benchmark is the recent moving average crossover. The 50-day moving average overtaking the 200-day moving average to the upside should be viewed as predominantly bullish even though the “golden cross” formation did not occur. Nevertheless, each of these moving averages will act as support for rising prices over the near-term as gas prices face renewed resistance on the upside. The key levels to watch on the upside are resistance at $2.750 and $2.900 before testing the psychological level at $3.000 per MMBtu. 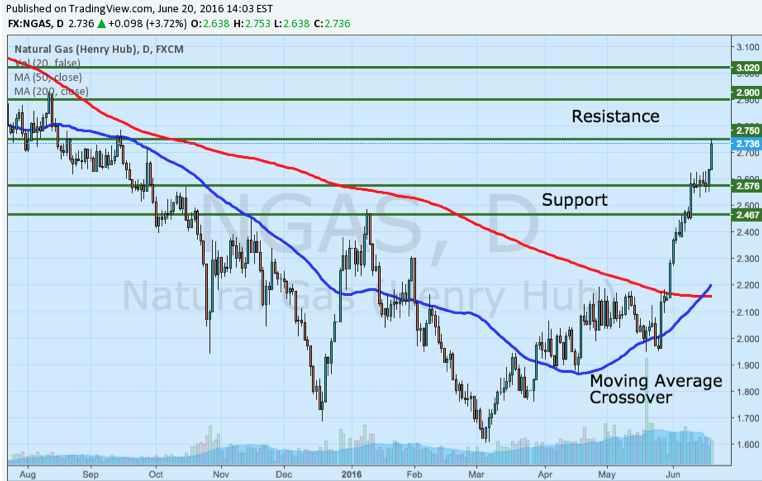 Added momentum from weather conditions has seen recent momentum in natural gas prices slightly overextended to the upside according to the relative strength index and stochastic oscillator. With the RSI pushing towards 80.00, this could be viewed as an extreme move to the upside that might quickly find itself on the retreat as price momentum higher takes a break. Helping to support this view is the stochastic oscillator also trending in significantly overbought territory. Should the %K line cross below the %D line at these levels and move back below the 80.00 level, this could be an early indication of a heightened possibility of a sharp pullback in prices. The support levels to eye for a correction would include $2.580 and $2.480 which was formerly a longer-term resistance level that stood in the way of the most recent breakout higher. 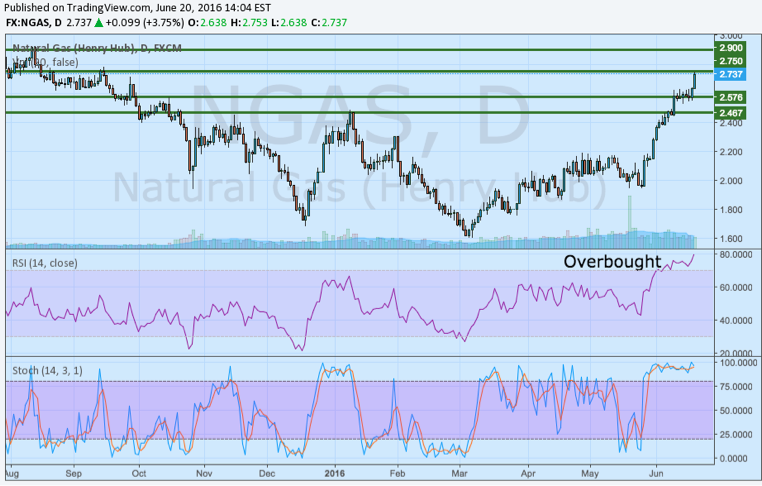 Due to the fact that the main driver of the current momentum higher in natural gas prices remains the focus on prevailing weather conditions, the potential for a production uptick and higher inventories is not as important a factor in determining the outlook for prices. Despite elevated prices beckoning a pickup in production especially in shale regions that are more flexible for production, this is unlikely to be a quick development.The bigger looming problem for prices remains the inventory glut, which even higher current demand is unable to quell. With these factors in mind, prices are expected to remain elevated or dip slightly in a pullback, before continuing upwards in-line with higher than average temperatures.

Digital Asset Insights #62 Are the Major Digital Coins Prepping for...

#FXDebates video: Will the Euro stumble?