As we mentioned previously, Elliott waves are fractals, with each wave being made up of lots of smaller versions of itself. For example, in the picture below, waves 1,3, and 5 are made up of a smaller 5-wave impulse pattern while Waves 2 and 4 are made up of smaller 3-wave corrective pattern. 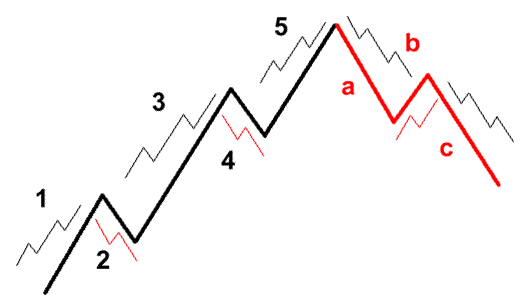 So, it’s worth keeping in mind that each wave is made up of smaller wave patterns, and this pattern repeats itself forever. In order to be able to label these waves easily, Elliott assigned a series of categories for the waves, arranged in order of the largest going down to the smallest, namely:

As you might expect, real-world price action charts are never as tidy as the theoretical diagrams that are used to describe them, and this makes it much harder to spot an Elliott Wave in real life. Harder, yes, but not impossible, as we can see in the following chart: 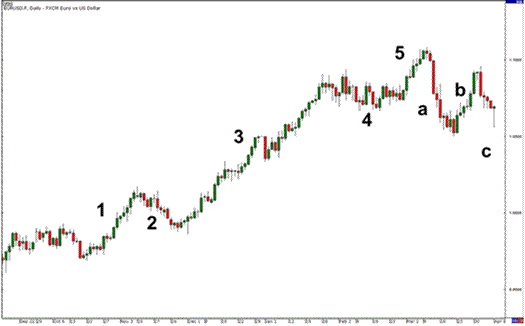 So, while you can see the difficulties inherent in labelling waves that aren’t shaped perfectly like the diagrams we’ve been looking at previously, you can hopefully also see that the theory does – in this case at least – seem to hold up quite well if you make allowances for this.

In the next couple of instalments, we’ll be looking at ways to help you identify waves correctly with relative ease, and show you how to trade forex using Elliott Waves.