For years, one of the most popular tools currency traders had was the Yen carry trade. Thanks to interest rates that barely budged as the Bank of Japan attempted to reverse a deflationary spiral, the Yen became a very lucrative funding currency, especially against the US dollar. However, the post-crisis years saw diminished interest in the strategy following a rapid appreciation in the currency. Now that rates in the US are once again set to rise, the question is whether the carry trade will regain its popularity based on the outlook.

With US fundamental data firming up and Federal Reserve Chair Janet Yellen confirming that a rate hike may be “appropriate soon,” the recent USDJPY rally has benefited from a multitude of tailwinds. Considering the Bank of Japan has little room to move raise rates with consumer prices still falling, the spread between each country’s benchmark interest rate is only set to widen. The wider the spread, the better the carry for those traders looking at a funding currency. The result is a significant opportunity in USDJPY over the coming years, even if rates hardly move.

Barring any major development that dissuades the Federal Reserve from normalizing policy, there is an exceptionally high likelihood that the US Central Bank will raise rates in December. After not adjusting policy for a year, hawkish speculation is sitting at a fever pitch. While Federal Reserve Chair Janet Yellen has highlighted that there is additional room for gains in the labor economy, rising inflation is rapidly reducing the downside risks to the outlook.

Although cyclically the US economy may be set to undergo a rough patch after the bull market of the post-crisis years, this should not be a factor in the Fed’s decision. As Yellen has so eloquently highlighted, the risks of inaction are equally serious, potentially spurring excessive risk-taking if left unchecked. Thus, policy is set to trend towards a more neutral level, according to the Chairwoman. However, the fact that she remains coy when it comes to actually defining the timeline for action does leave financial markets in a precarious position.

Should Yellen and the FOMC abstain from outlining a path for rates in the next FOMC statement, it could set the stage for a Dollar reversal that mirrors the price action of a year earlier when the Fed moved off the zero bound. While it is unlikely that the Fed will take such a step during its December meeting, President-elect Donald Trump may provide the catalyst in 2017. His fiscal stimulus in the form of tax reform and infrastructure spending could lead to rapid acceleration in the velocity of money throughout the economy, spurring higher than anticipated inflationary pressure.

While US fundamentals have been the predominant driver of USDJPY momentum higher, Japanese developments are also playing a role. The announcement earlier in the week that the Bank of Japan is committed to hitting yield targets and ready to buy unlimited government bonds sparked a brief reversal in USDJPY. Longer-term, however, these efforts to monetize debt in an attempt to keep borrowing costs low will add money to the economy, helping the Yen depreciation over time and aiding the Bank of Japan in its fight to restore inflation. The result is helpful tailwinds to boost USDJPY more medium-term.

Recent momentum higher in the USDJPY pair has come from multiple directions. Besides heightened speculation that an interest rate hike is right around the corner from the Federal Reserve, the commitment undertaken by the Bank of Japan to buy bonds will also help the pair appreciate. On the basis of price-action, the moving averages trending below USDJPY have been supportive of further upside gains. Should the 50-day moving average cross the 200-day moving average to the upside in the coming sessions, it could be viewed as a bullish crossover, a signal typically accompanied by strong momentum higher. Furthermore, on a shorter-term basis, the upside breakout from the ascending triangle pattern could be a sign that the trend higher is set to continue.

However, standing in the way of further gains lies the Stochastic Oscillator and Relative Strength Index. Each of these oscillators are currently indicating that USDJPY has run too high too fast. With both trending firmly in overbought territory, the risk of a pullback to recent momentum higher in USDJPY could be rapidly unwound. The implication is that a correction towards 105.69 to 107.65 is completely feasible before the pair makes a run towards 115.00 on the upside over the medium-term.

US fundamentals will continue to be a significant driver of price momentum in USDJPY over the near-term, especially if the case for a rate hike strengthens further. Data due in the coming sessions on durable goods could shift the thinking about the probability of a rate hike, especially after the challenges facing the industrial sector. In Japan, upcoming inflation figures could give an indication as to whether the Bank of Japan’s asset purchases and yield targeting are paying off. However, with no real surprises expected until December and rates set to widen, the resurgence of the Yen carry-trade is all but in play. The result is a currency pair set for a continued rally higher after a pullback or correction from current upside momentum. 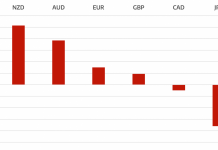