The US dollar plunged to nearly two-month lows on Friday, as global stock markets continued to retreat after disappointing Chinese PMI data heightened worries about the global economy.

The dollar index, which tracks the performance of the dollar against six global peers, fell 0.6% to 95.43, the lowest level since June 29. The dollar has plunged 1.7% against world currencies since Tuesday.

Gold futures, which typically trade inversely with the dollar, advanced for the fourth time in five days, reaching a daily high of $1,167.90 per troy ounce on the Comex division of the New York Mercantile Exchange.

A weak global growth outlook has weighed heavily on the financial markets this week, causing the biggest drop in the Dow Jones this year. The Dow plunged more than 358 points to 16,990.69 on Thursday and is down 0.3% compared to year-ago levels.

Europe’s major indices were also down across the board, led by a 1.4% plunge on the FTSE 100 in London. Frankfurt’s DAX Index also declined 1.3% and is down more than 11% over the past four weeks.

Friday’s sell-off was aided by disappointing Chinese manufacturing data, which heightened concerns about another currency devaluation from Beijing. The Caixin China manufacturing PMI fell to 1.7 points to 47.1 in August, a new two-year low.

The PMI report indicated that China’s economy “is still in the process of bottoming out,” which likely elevates the risk of volatility in the markets.

China’s economic growth slowed to a 24-year low in 2014. Growth has remained subdued in the first two quarters of 2015.

In energy news, oil prices continued to plunge on Friday. West Texas Intermediate, the US futures contract, fell 53 cents or 1.3% to $40.79 a barrel, a fresh six-and-a-half year low. US oil prices are on pace for their eighth consecutive weekly fall, the longest losing streak in 29 years. 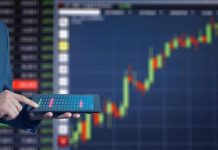