“Don’t get impatient when it takes too long, or drink it all when it tastes too strong, I gotta feel alive even if it kills me, promise to always give you me, the real me” –Drake

Did you know the Canadian Dollar is commonly called the Loonie because on the Canadian $1 coin there is an image of a bird called the Loon?  That does not sound too crazy.  Rather than a bird, I would have pictured an oil drum or a natural gas refinery on the coin as Canada is one of the top energy producers in the Western Hemisphere.  While energy prices and the Canadian dollar may be hit with some short term weakness due to the prolonged sub-par growth in China and a recession in Europe, the medium to long term prospects in Canada, and more specifically the Canadian Dollar, in my opinion, remain positive.

My perception of currencies is not based solely on images on their coins or notes, but the fundamental and technical factors associated with the sovereign states or regions.  Based on IMF expectations, worldwide economic growth is expected to be 3.5% in 2012.  With Europe; the largest economic region in the world in a recession, and China; the 2nd largest economy in the world growing below trend pace (less than 8.5%) it is clear that the IMF’s forecasts will come to fruition.  The table below shows the IMF projections of advanced economies: 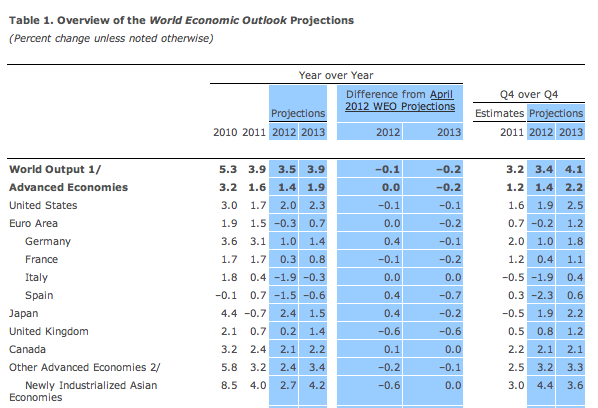 Thus,  overall demand for goods and services are expected to be subdued, with commodity producers such as Canada, whose major exports are oil and natural gas, expected to feel a pinch in growth.  While this is true, Canada’s GDP growth has been better than some of the developed nations, including the US.  Latest data suggests that Canadian GDP growth was 1.8% year-over-year for the 2nd quarter of 2012, higher than the US by 0.10%.  Also energy prices, particularly WTI Crude Oil and the Henry Hub, have been particularly firm for most of the year.  The chart below gives a broad perspective for over the past 5 years: 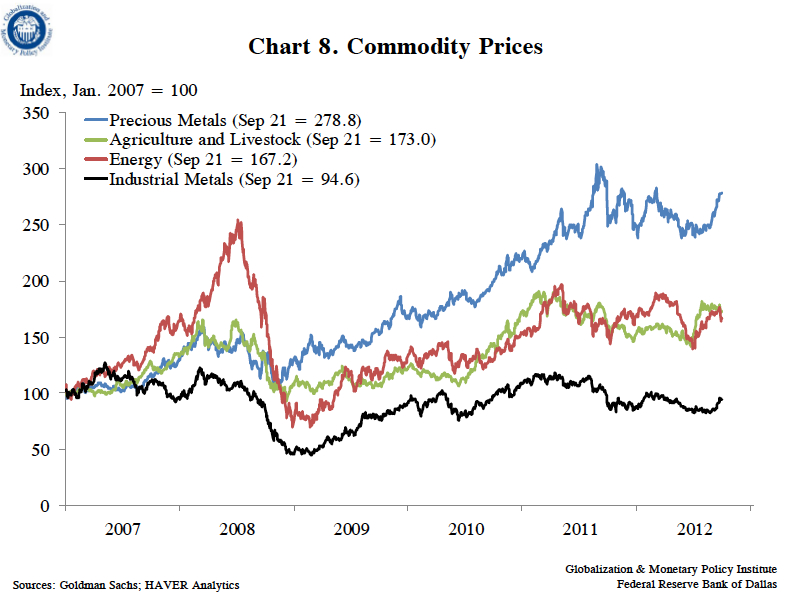 Considering these factors and that Canada remains one of the few countries with a AAA credit rating, the medium to long term prospects for the country and the Canadian dollar remain strong.

With the major central banks pursuing quantitative easing to stimulate economic demand, investors are expected to fly to value-currencies such as the Canadian dollar.  Quite recently both the Fed and the ECB stated that they are pursuing some level of unlimited quantitative easing.  The Fed is expected to purchase US$40Bn MBS securities a month and the ECB is purchasing short-term European Sovereign Debt ad infinitum.  Therefore the choice of Loonie denominated assets or the Loonie itself in a portfolio is like shooting ducks in a barrel.  Notwithstanding these QE measures, Canada’s benchmark rate of 1% versus the ECB’s 0.75% and the Fed’s 0-0.25% place the Canadian Dollar at bid versus the 2 currencies in the medium to long term as investors search for yield pick-up. 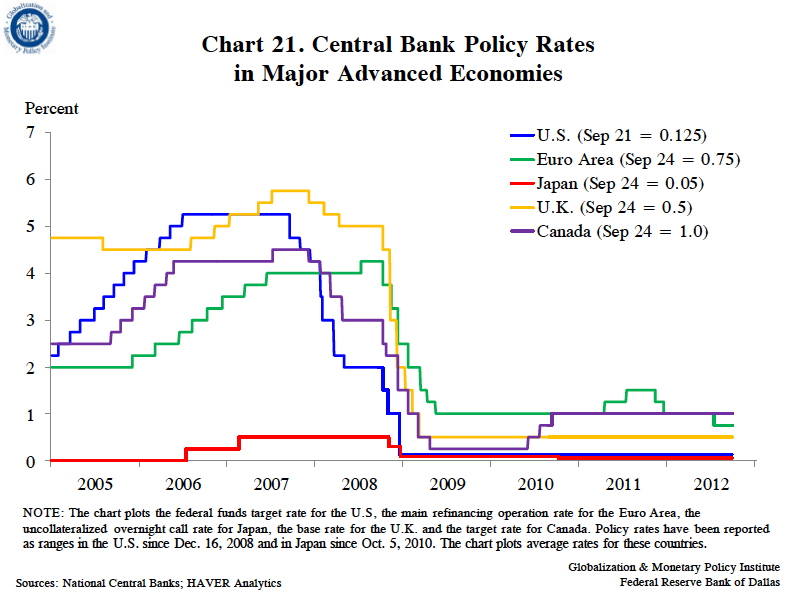 Investors favouring the Loonie focus on the relationship with the US Dollar and The Euro, i.e., USDCAD and EURCAD.  In the medium term EURCAD has been in a downtrend.  In mid-2011 the FX pair was trading near the highs of 1.43747 and quite recently, in August 2012, EURCAD made a 5 year low of 1.2125, which is approximately 19% from the mid-2011 highs.  In the short term EURCAD had a bounce from the lows, rallying 5.54% from August 2012.  However, the bounce seems exhausted and now may be favourable for a short position.  A re-test of the 1.2125 level is anticipated over the next 3 months.  The chart below shows the weekly chart of EURCAD:

Similar to EURCAD, USDCAD is in a medium-term downtrend, with highs of 1.06559 in October 2011 and a most recent low of 0.96311 in September 2012, a 10.64% swing within just 11 months.  On the shorter term, the price movement lows seem limited and a move higher in USDCAD is expected.  As USDCAD approaches parity, a short position in USDCAD would provide a good opportunity for Canadian bulls. The chart below shows the weekly chart of USDCAD:

It may seem insane, but the Loonie Strategy consists of taking short positions in USDCAD and the EURCAD.

The fundamentals of Canada remain strong versus the US and Europe.

Even though short term weaknesses in the Canadian dollar may be seen against the US Dollar and the Euro, in the medium to long term, the path to stability, crazyily enough, is the Loonie.

Mr. Thompson joined the Trinidad and Tobago Unit Trust Corporation in 2008, where he became a portfolio manager, with responsibility for the TTUTC Universal Retirement Fund.

In 2012 he became a member of the Investment Strategy Team as a Currency Strategist in the Investment Research and Portfolio Management Department of the Unit Trust Corporation. Furthermore, Mr. Thompson currently has responsibility for the UTC Global Bond Fund.

Cedric has a Bsc. in Actuarial Science, having graduated from the University of the West Indies in 2007.  Cedric is currently a Level II candidate of the highly coveted Chartered Market Technician (CMT) designation.

Everything You Need to Know About White Label Trading Software