According to Bitcoin technical analysis, it has been identified that the uptrend is likely going to be reversed from current market levels. An enthusiastic market breakout has drizzled which has ended up losing the vital momentum. If the resulting downwards trends is just a correction, there may be a powerful turnaround in the market in the near future. However, if the big players in the Bitcoin market fail to be on top of their game, things could take a turn for the worse.

It is important that traders and investors both be careful and prepare for a powerful price reversal. The advance has been losing critical momentum because there have been several indications market conditions are worsening and it is experiencing a lack of volume in terms of transaction and reduced trader participation. It has also been identified the prices will reverse from current levels and will bounce back to $600 and will retrace almost 50% of the advance, which is $520. It is important you understand that the idea of complete price retracement and resumption remains active.

A Comparison with an Earlier Advance

According to the Bitstamp Daily chart, which has been indicating a price action since March 2012, the strong advance which took form in October last year is being supported by the analogous behaviour of the momentum signals, with MACD being at the lower half of the chart. On each consecutive higher level shown by the MACD, the market price has formed an equal high. This coordinated action between the price and the indicator paves the way for the advance and as you can probably see, the results become quite evident in November high.

If you look at the right side of the chart given below, you can see the current advance making a local high, but compared with the peaks formed during the downfall, the local high can still be considered a lower high. However, if you take the momentum indicator into account, you will see the price has increased to the correspondence of a MACD rise in January, but the actual price cannot be seen anywhere near this peak. This occurrence is what is known as “reverse divergence” or “hidden divergence” and is displayed on the chart by red lines which are connecting with the higher highs. 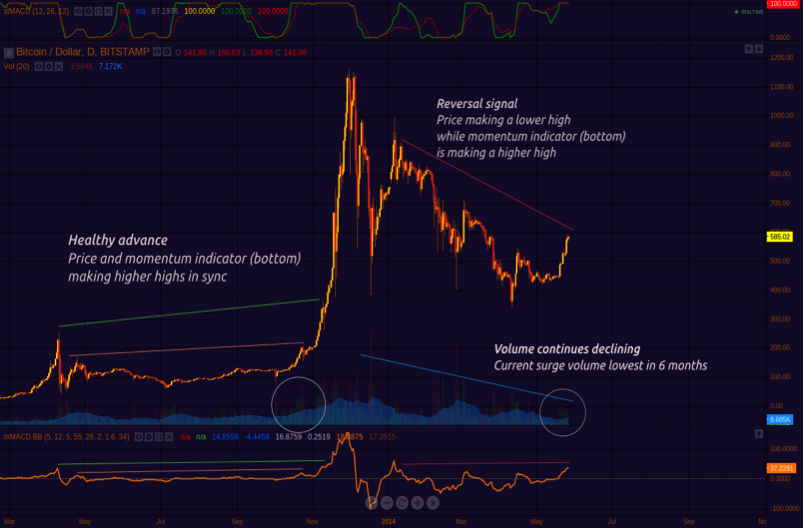 As you can probably see, the volume of trade has substantially but gradually declined during its downwards spiral from the November high. If you are thinking something here isn’t what it seems, you are right because a supposed breakout has now advanced on a seriously low volume in the market.  Notice how the rise in price in October 2012 could also be associated with higher volume than the current advance. And that too in a period when Bitcoin adoption and participation was recorded at considerably lower levels compared to the penetration which has been achieved presently.

So, a reduction in trade volume in the market during breakout directly proves the movements in the market are not wide enough. This could be due to the fact that some of the big players with larger holdings have decided to exit that market or smaller traders have decided to release their holding in the exchanges while the big boys sat idle. You really don’t need to be a rocket scientist to figure out what happened here. 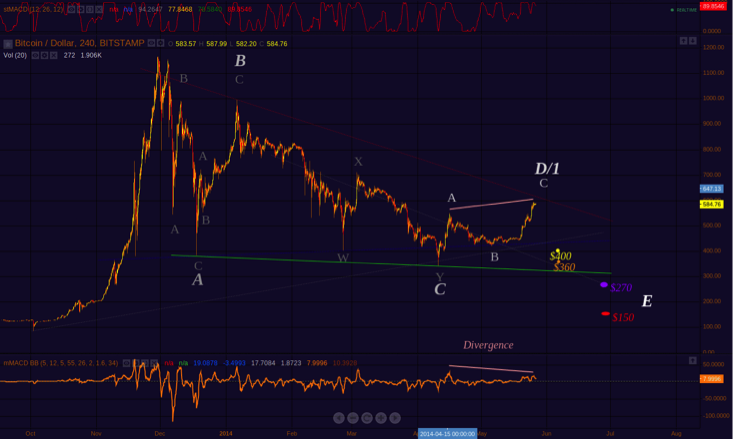 In accordance with the four-hourly chart given above, Bitcoin prices are now nearing another falling trend-line (illustrated in red), and this one could possibly a nemesis to the advance. The two pink lines on the chart indicate a ‘Regular Divergence’ which is directly associated with the MACD indicator as shown at the bottom.