Although investors are piling back into US equities as evidenced by the relief rally in the S&P 500 during the Tuesday trading session, it is still too early to call the dip a pullback in anticipation of further upside. In fact, it might be an early sign that risk sentiment is shifting for the worse as financial markets digest the implications of the “Brexit” vote and take a closer look at the S&P 500’s fundamental backdrop. While US multinationals have slashed their own earnings outlook and revenue guidance, shares have remained elevated despite the looming risks, indicating that the most recent slide might just be the beginning of a change in trend for broader market benchmarks. Until the dust settles, traders trying to catch the falling knife of equity markets might find the reward unworthy of the potential downside risks.

Overall, the sharp losses on Friday across global equity markets marked the single worst day of losses ever experienced, even overtaking the Lehman Brothers shockwave. As the uncertainty of a European Union without the UK sent risk assets into a tailspin, equities fell across the globe. Financial stocks were among the most hurt by the “Brexit” vote, with the turmoil eroding any confidence in a 2016 rate hike according to Fed Funds futures. The reason financial stocks were so widely affected was the possibility of an interest rate cut which would eat away at banks’ interest income. In a rising rate environment, interest income for financial sector typically rises while the opposite is true during a period of falling rates. With no rate hikes expected before the end of the recover, shares of financials might continue to drag on the index’s performance.

Aside from the weakness in the financial sector, on a valuation basis, the S&P 500 remains very expensive relative to a historical price-to-earnings average multiple of 15.60, currently sitting at 23.53 after markets bounced on Tuesday. Even Federal Reserve Chair Janet Yellen chimed in on the matter earlier in the month during her semiannual Senate Testimony, remarking that “valuation pressures have increased somewhat as expectations for corporate earnings have been revised downward.”The fact that the S&P 500 has failed to make new highs in over a year gives credence to the idea that a top has been formed in prices. Finding organic growth in S&P 500 components is an increasing rarity, with much of the recent gains credited to financial engineering and less attributable to top and bottom line growth.

While a weaker outlook for revenues and corporate profitability is negative on a headline basis, there remains a sliver of optimism amongst the market bulls. The rapid climb in volatility has come with renewed speculation that the Federal Reserve might be forced to cut rates back to 0.25% despite a considerably stronger trajectory of economic activity. However, though first quarter GDP printed at a stunning 1.10%, the second quarter will be highly dependent on spending which has deteriorated. As the latest figures show, savings rates averaged near 5.00% plus for the better part of 2016, meaning that consumers are focused on storing their increasing hourly earnings instead of consuming. Should consumption fall, the Fed might respond with rate cut and restart the printing press, potentially making the most recent drop in the S&P 500 look like a blip on the charts in the months ahead. 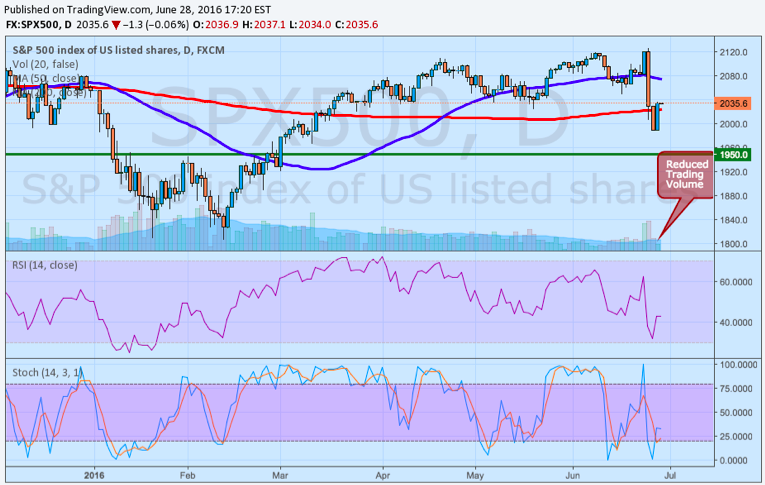 For one, neither the relative strength index or stochastic oscillator gave strong signals that the index was substantially oversold. Even though the dip was clearly bought by market participants during Tuesday’s session, filling in the weekly reopening gap lower, another close below 2000.00 paves the way for a retest of the longer-term 1950.00 support level. Moreover, increased volatility usually accompanies a change in trend, lending more credibility to a longer-term shift in trend. The latest bounce could widely be attributed to an unwind of pre-Brexit hedges, evidenced by the low volume move higher in shares. If this a squeeze higher and not buying momentum, it will be prudent to wait and see before taking aggressive positions.

While some investors might appreciate the relative value of the S&P 500 relative to other global equity indices, on the whole, the outlook for the index remains pessimistic. If the current bounce is indeed a sign that shorts are exiting and waiting to reset bearish positions, then anticipating a further upside rebound might not be sensible. As the wild swings climb in frequency, so should caution, as rising volatility and trading volumes typically accompany changes in trends. Although a rate cut might help shares rebound, it might not be enough to drive shares to new highs. Furthermore, based on recent US growth, inflation, and employment trends, the Federal Reserve may opt to leave rates on hold instead of adjusting policy. These factors combined with added downward pressure from financials means the S&P 500 has few drivers to sustain upward momentum over the medium-term, adding to the bearish risks.