The resurgence of the FTSE 100 in recent times has been one of the biggest stories in the world of finance. However, there are some indications that the party may soon be over, with the index falling sharply during June.

Many analysts believe that the recent bull run has been fueled, to a large extent, by successive rounds of quantitative easing by central banks, which has made bigger lines of credit available to traders to invest with. The U.S. Federal Reserve has been pumping $85 billion per month into the monetary system in an effort to stimulate the credit markets, and much of this newly available credit has been invested in a rising stock market. One of the knock-on effects of QE is that government bond yields have been falling, which has had the effect of driving investors away from the bond market towards equities in search of greater returns. These two factors should make it a good time to invest in the stock market, with the combined increase in activity driving up prices across the board.

While this was certainly the case a few months ago, the picture appears to be changing. The FTSE 100 fell sharply in June, after hitting a 14-year high of 6840.3 on May 22nd. This also happened on the two previous occasions when the FTSE reached this level – in 1999 and in 2007. This suggests that the rally we have been seeing in the equities market is yet another bubble – but has it burst?

This is the subject of a detailed infographic published by Saxo Markets, which we have shown a portion of below. This explores the possible reasons behind the recent bull runs in the FTSE 100 and other major indices such as the German DAX, the U.S. Dow, and the Japanese Nikkei, and takes a look ahead to see what might be in store for equities investors over the next couple of years. 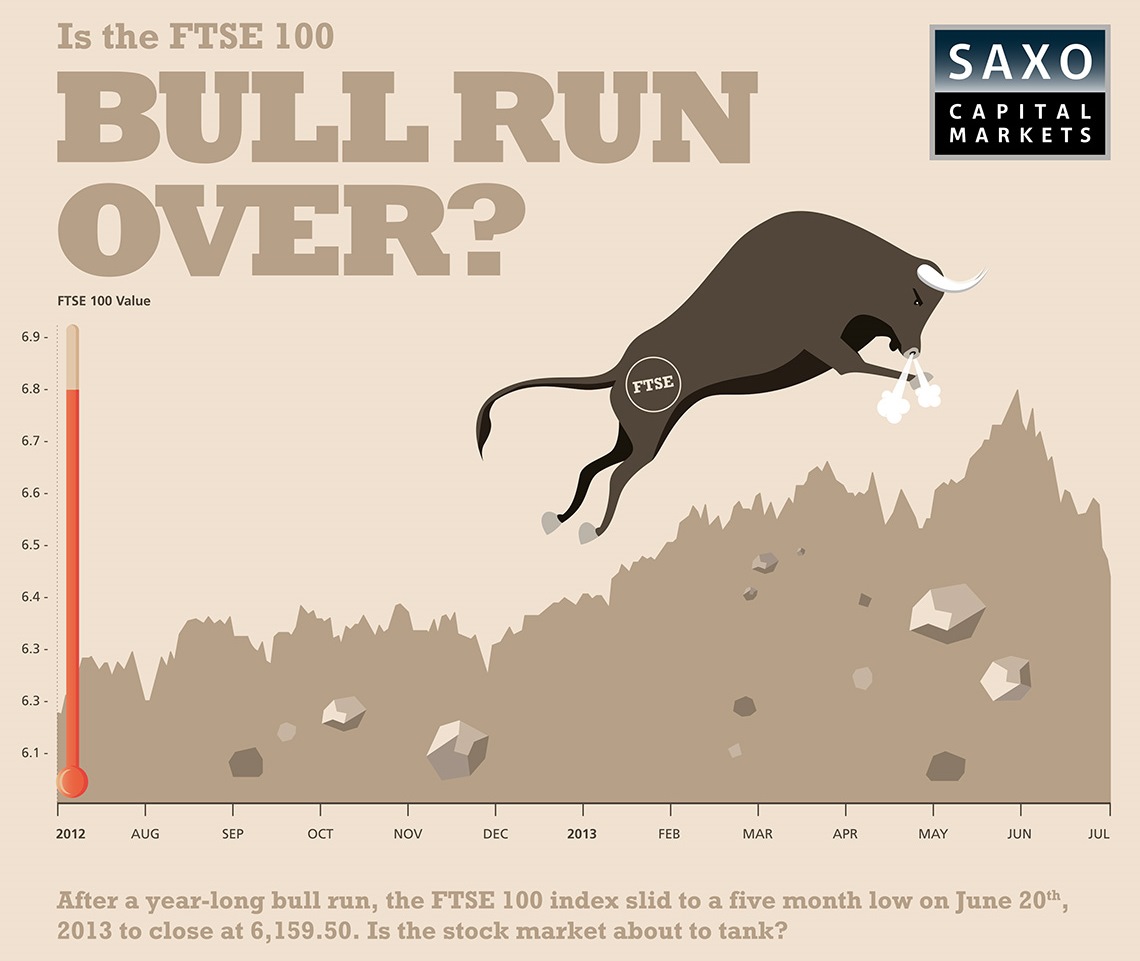 The way ahead for the FTSE currently looks very unclear. Saxo forecasts that the return on equity from FTSE 100 stock, which stood at 21.98 at the beginning of 2013 and hit a peak of 22.45 on May 23rd,  is set to increase to 26.80 in 2014 and fall slightly to 25.10 in 2015. This indicates a net increase on the average return on equity on FTSE 100 stock, but the price/earnings forecast tells a different story. Having stood at 17.47 at the turn of the year, and falling to 16.66 by May 23rd, Saxo predicts that this downward trend will continue, which could lead to lower equity returns in the next couple of years.

However, the main reason why many analysts have become bearish on the FTSE is the expectation that the U.S. Federal Reserve could soon pull the plug on the quantitative easing that has partly fueled the stock market rally. In the infographic, Saxo Capital Markets’ Senior Market Analyst Nick Beecroft is quoted as saying: “There has been nothing that has contributed more to equity market rallies than the Federal Reserve’s largesse”.

If this proves to be correct, then the end of QE could see stock prices tumble, and the decline in the FTSE during June may be a sign that investors are trying to get out while the going is good.  So, it’s a nervy time for investors in the stock market, with so many dark clouds on the horizon, but the path ahead is far from clear. It might be the case that improved growth in the economy as a whole will counterbalance the effect of the end of QE, and that stocks might even rally to a new high. However, if history is any guide, then the FTSE is unlikely to reach that level for some time, and is much more likely to go through a prolonged bear run.

This isn’t necessarily bad news for investors, as falling stocks offer excellent opportunities to buy into equities when they are underpriced, and the temptation will be there to sell up while they are still trading relatively high and buy when the market bottoms out. However, this assumes that the market will indeed see another crash of sorts, or at least a prolonged bear run, and although this looks likely, it is far from assured – particularly in light of encouraging GDP growth figures for the UK economy, which stood at 0.3% for the first quarter and are expected to double to 0.6% for the second quarter. So it might not be time to panic, but it’s definitely a time for investors to be keeping a close eye on the markets.