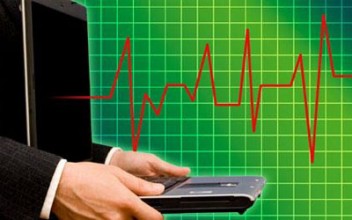 Ever since the introduction of electronic exchanges in the 1970s and 80s, traders and computer programmers have striven to create the holy grail of market speculation – a ‘black box’ that just sits in the corner of your office making money for you all day. Although this has still yet to be fully achieved, as even the most effective automated trading systems require careful monitoring and calibration by human traders, great strides have been made in recent years. The big breakthrough came in 2001, when a team of researchers at IBM demonstrated that two algorithm trading strategies could consistently out-perform a human trader under test conditions. According to a BIS report from 2012, automated trades now account for over half of all trading volume on the forex market, and this proportion is expected to continue its ascent in the coming years.

In the first part of our guide to automated forex trading software, we shall be taking a look at the most widely-used platform for this purpose – Metatrader 4 – and its more powerful but less popular sequel Metatrader 5.

Algorithmic trading was once considered the exclusive preserve of the major market participants, such as banks and hedge funds, but this all started to change in 2002 with the launch of the first version of MetaTrader by Russian software developers MetaQuotes. This new cross-broker trading platform allowed online traders to write their own technical analysis indicators and trading algorithms (known as ‘Expert Advisors’) using an intuitive programming language called MQL, and share them with the other users of that platform. While the early versions of the software were quite promising, it wasn’t until the release of Metatrader 4 (which is strangely enough the third version of the software – they skipped number 3) that the platform really started to gain wide acceptance among the trading community.

This version, which was completely written from scratch, offered several major improvements on previous versions, most crucially to the security and stability of the software. It was swiftly adopted by many major brokerages, quickly becoming the industry standard online trading platform for forex, futures, and CFDs. Soon, there were thousands of Expert Advisors available for free or paid download, and a large and highly engaged online community built up around the platform and its associated programming language.  Metatrader 4 (or MT4 for short) soon became the go-to platform for online traders who were looking to harness the potential inherent in algorithmic trading strategies, and is now offered by the vast majority of brokers alongside their own proprietary trading platforms.

The software is available for free download, either directly from Metaquotes or from a broker. Every broker offers the same version of MT4 – the only difference if you download it from a broker is that it will come pre-loaded with the necessary login information for your broker account, and will be easier to integrate with the broker’s own platforms. However, this can all still be done if you download it from Metaquotes, it just takes a little longer. The full version of the software is only available for Microsoft Windows, so if you are using a Mac or a PC running a PC with a non-Windows operating system such as Linux or ChromeOS, you will have to use emulation software that allows you to run Windows software on your machine.

The mobile version of the software is, however, available for a wide range of handset types including Android tablets and smartphones, iPhone, and Windows Mobile PDAs and smartphones. As is the case with most mobile versions of trading platforms, it lacks many of the advanced features of the desktop version, but it is surprisingly powerful nonetheless. There’s no MQL4 implementation, so you can’t use your own scripts or those produced by third parties, but it does come with 30 of the most critical technical analysis indicators and the ability to monitor prices and place basic trade orders.

All versions of the software are available in over 20 languages, with MetaQuotes offering multilingual support, and the trading terminal can also be set up to use a wide variety of different currencies. The standard version of the platform is intended for use with just one trading account, but there is a multi-terminal version that allows you to manage multiple accounts from the same platform. Metaquotes also recently launched a social trading service for Metatrader 4 and 5 called Trading Signals (which we covered in depth in another article) that allows users to automatically copy the trading activity of another trader, sharing in their fortunes and providing a valuable insight into the strategies adopted by the most successful traders. 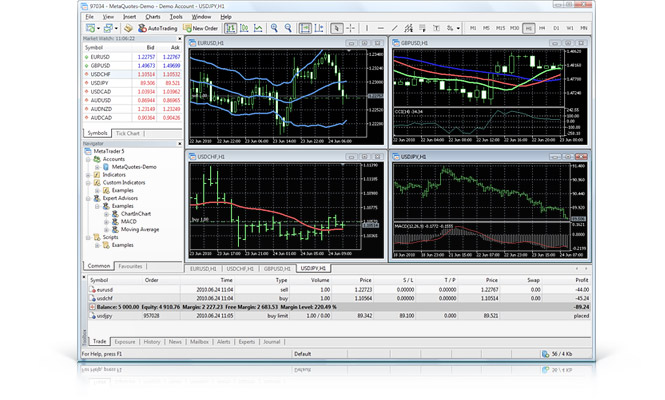 The runaway success of MT4 has been something of a double-edged sword for Metaquotes, in that it has made it more difficult to make inroads into the market with the new version of the software, MT5. This platform, which was once again written entirely from scratch, is suitable for a wider range of asset classes including equities and options as well as forex, CFDs, and futures. It features a number of enhancements over its illustrious predecessor, including a bigger variety of timeframes, one-click trading, and improvements to performance and security. Depth-of-market information is available to help traders identify thinly-traded instruments, and there is a much-expanded range of trade orders available, including request, exchange, sell stop and buy stop orders.

MT5 comes with a brand new version of the MQL programming language, which is object-oriented (and therefore much easier to use), easier to debug, faster, and capable of creating more complex Expert Advisors that can produce much more precise back-testing results. A new strategy tester allows users to test strategies across multiple currencies with ease, and the range of technical analysis tools has been greatly expanded.

So, with all these improvements, why hasn’t everyone jumped ship to MT5? Well, the main reason is that the much-improved MQL5 is totally incompatible with MQL4. This means that MT5 users cannot access the vast online library of MQL4 scripts, and the corresponding MQL5 library is much smaller. This severely reduces the functionality of MT5 as compared with MT4, even when you take into account all the enhancements to the platform itself. Also, many users are reluctant to learn a whole new programming language (which is what MQL5 is) when they have invested so much time in mastering the old one.

For these reasons, MT5 has not caught on in the way that its developers might have liked, even though it was launched three years ago. Nevertheless, the user base is growing steadily, as is the library of EAs, and if it continues to do so, there will surely be a tipping point at which it will make sense for brokers and traders to make the switch to the new version.

Tomorrow, we shall be taking a look at some of the more high-end alternatives to MetaTrader for traders who wish to write, test, and implement more advanced automated trading strategies, such as NinjaTrader, TradeStation, and OpenQuant.