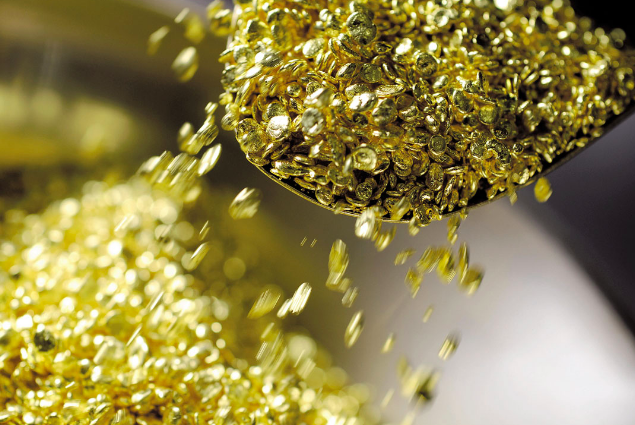 The rally in precious metals over the last two months following several important fundamental shifts has found itself stalled out as prices once more find themselves on the retreat. However, the steep pullback might just prove to be a technical correction and not a more significant reversal in the medium-term upward trend depending on how market conditions evolve. Apart from persistent fears of deflation which have kept a lid on gains in precious metals prices combined with the prospect of further interest rate normalization in the US, a string of disappointing fundamental data and growing uncertainty across Europe is stoking sustained flows to safe haven assets. Even though the pullback in gold prices could persist over the coming sessions, the growing array of risk factors could very well derail any global recovery, helping gold rise to new multi-year highs as investors seek protection from a potential oncoming storm.

Precious metals have been amongst the strongest performing asset class this year as risk aversion grips global financial markets. However, the recent risk rally led by the charge higher in equity benchmarks has not been met with a significant gold pullback, indicating that despite positive sentiment temporarily prevailing, investors are still trying to hedge their risks against portfolio losses in other areas. Gold prices had long been climbing off multi-year lows below $1050.00 per troy ounce reached back in December, helped in large part by faltering fundamentals and that led to considerable monetary easing and stimulus from central banks across the world. Now that the British referendum has added significant volatility to price action, there is a rising risk of a significant market correction, a development that could help gold prices sustain momentum higher.

One of the main contributors to volatility in financial markets over the last few weeks has been the uncertainty that followed the British vote to leave the European Union. Not only did the move deal a major blow to the European Union, but it has also led to worsening economic conditions in the UK as businesses hit the brakes on investing and hiring until the dust settles. A new administration working to trigger Article 50 of the Lisbon Treaty and activate the exit will take time, adding to potential event risk going forward. However, more pressing that the British vote which led to a sharp climb in prices is the ongoing Euro Area banking crisis which threatens the monetary union with a new set of hurdles.

Italian banks, which have long been dealing with a potential nonperforming loans catastrophe, are seeing their fortunes rapidly deteriorate after being unable to repair balance sheets effectively over the years. Aside from the Italian banks fighting to stay alive, the major looming risk factor on the horizon for the whole banking sector is Deutsche Bank and its explosive derivatives portfolio. With investors taking a closer look at the bank’s exposure and leverage, this systemically important institution has the possibility to inflict more damage than Lehman Brothers. The sheer difference in scale means that a Deutsche Bank failure could take many other European banking institutions down with it. With these banking, economic, and political risks combined, the outlook has deteriorated sharply.

Gold prices have historically been closely related to movements in the US dollar, exhibiting a relatively high inverse correlation, with any moves higher in the dollar echoed by corresponding moves lower in precious metals. Mixed visibility from important labor data and inflation that has been slow to climb saw the probability of rate hikes rise and fall spectacularly during the first half of the year. At this point, Fed Funds futures are currently pricing in a 41.00% probability of a US rate hike before the end of 2016 compared to the two to three rate hikes that certain Fed Presidents anticipated during statements held earlier in the year. With these factors in mind, further upside in the dollar may prove elusive over the second half of the year unless it is the benefactor of safe haven flows which could reduce gold’s appeal.

Momentum higher in gold prices has cooled following the latest leg higher of the medium-term uptrend, giving credence to the idea that gold prices are undergoing a technical correction. Acting as support against any prolonged retreat in XAUUSD are both the 50 and 200-day moving averages which are trending higher below the price action. Additionally, the emergence of an equidistant channel formation is contributing to the potential bullish bias in gold. The channel still needs a point of confirmation on the lower channel line for a third time to considered a channel, however, that implies a potential bullish opportunity near $1300.00 per troy ounce. Should this level hold, it suggests the possibility of additional momentum higher whereas a candlestick close below the lower channel line might be early indication of a breakout and reversal lower. 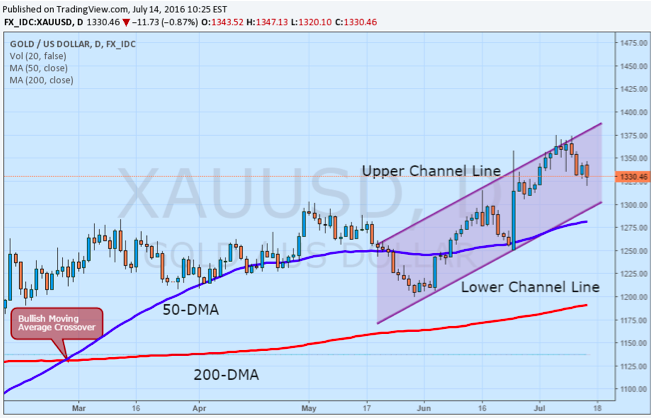 Gold will continue to benefit from uncertainty and monetary easing across the globe. More funds in the money supply from lower interest rates and quantitative easing will create a supportive backdrop for gold prices to rise further. Additionally, a European banking failure could add to safe haven flows, boosting gold’s appeal even further. With the outlook for higher interest rates in the US largely viewed as less probable over the medium-term, the only real threat to the current rally is a flight to quality which pushes up the value of the US dollar. Absent a dollar rally that reduces gold’s appeal as a hedge, the environment for precious metals will continue to be skewed towards upside in prices over the near-to-medium term