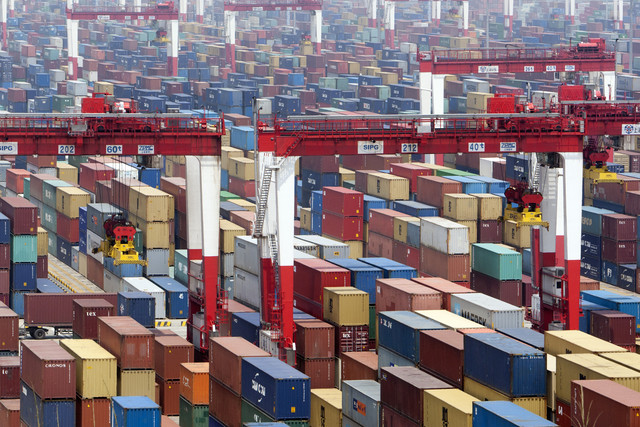 Asian and European stocks declined on Tuesday after government data showed another fall in Chinese exports, signaling that global demand remained weak at the end of the third quarter.

In US dollar terms, China’s exports fell 3.7% in September from a year earlier, following a drop of 5.5% the prior month, the General Administration of Customs reported Tuesday. Imports also plunged 20.4% from a year earlier compared with a 13.8% fall the previous month. As a result, China’s trade surplus widened slightly to $60.3 billion in September from $60.2 billion the previous month.

China’s export sector is struggling against weak international demand. A revised forecast from the International Monetary Fund (IMF) earlier this month showed global GDP is forecast to grow just 3.1% in 2015, its slowest pace since the 2009 recession year. Growth is forecast to remain modest in 2016.

After a solid start to the month, Asian stocks were mostly down on Tuesday. Tokyo’s Nikkei 225 Index fell more than 200 points or 1.1%.

In China, the CSI 300 Index of Shanghai and Shenzhen stocks dipped 0.1%. However, the benchmark Shanghai Composite Index closed up 0.2%.

Stocks experienced a bigger decline in Europe, led by a 1.7% fall in the German DAX. London’s FTSE 100 Index was down 1% in the afternoon session.

Persistently weak inflation was attributed to a 9.3% drop in energy prices. So-called core inflation, which strips away energy costs, rose 1.1% in September.

Wholesale prices were down 0.6% compared with August and 1.8% over year-ago levels.

Energy prices were little changed on Tuesday after falling sharply at the start of the week. The West Texas Intermediate (WTI) benchmark for US crude was up 9 cents at $47.19 a barrel on the New York Mercantile Exchange. Brent crude, the international benchmark, was unchanged at $49.86 a barrel on ICE Futures Europe.