Usually, forex traders can only make money from currency pairs that move in value. Thankfully, they tend to do this quite a lot. However, there is another way to make money from trading currencies – even if the price stays exactly the same – and it’s called the ‘Carry Trade’. In this series, we shall be explaining how the carry trade works, how to do it, and the things that you need to look out for when you are engaging in these activities.

What is the Carry trade?

For example, let’s say you went into a bank to borrow £5,000 at a fixed annual interest rate of 1%. You then use that money to buy £5,000 worth of government bonds that pay 5% a year. This gives you a locked-in profit of 4% per year, providing the government in question doesn’t default of course.

While a few percent a year might not sound like much, when you apply it to the spot forex market, where you can often trade with quite a high degree of leverage, it could turn into a pretty good earner. For example, with leverage of 20:1, the deal above would realise an 80% annual profit.

Carry Trades in the Forex Market

At the end of every trading day, all positions in the spot forex market are closed, and they are re-opened automatically by your broker the following day. This process is known as ‘carrying’ or ‘rolling over’ a position to the next day. At this point, the broker debits or credits you with the overnight difference in interest rate between the two currencies.

While any percentage gain from rollover is likely to be quite small, when multiplied by leverage, it can become quite substantial.

You have £10,000 in your trading account, and have found a currency pair with an interest rate differential of +5%. You then open a £1,000 position with 100:1 leverage on that currency pair, effectively buying £100,000 worth of that pair. If you were to hold that position for a year, there are three possible outcomes:

Here is an example of a long NZD/JPY trade with an interest rate differential of 4.10%: 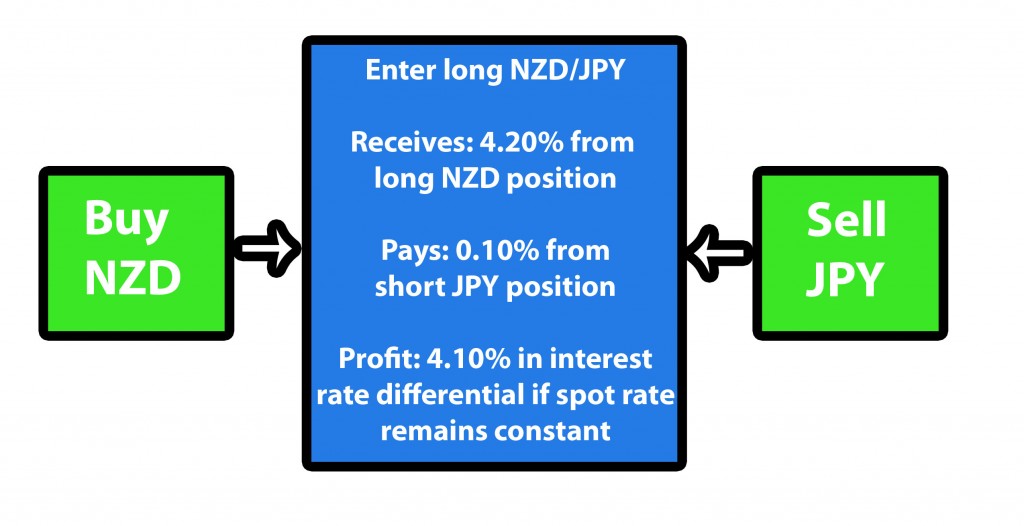 So if you bought NZD/JPY at these rates and held your position for a year, you would earn a profit of 4.10% on the interest.

As you might expect, the converse is true when you sell NZD/JPY: 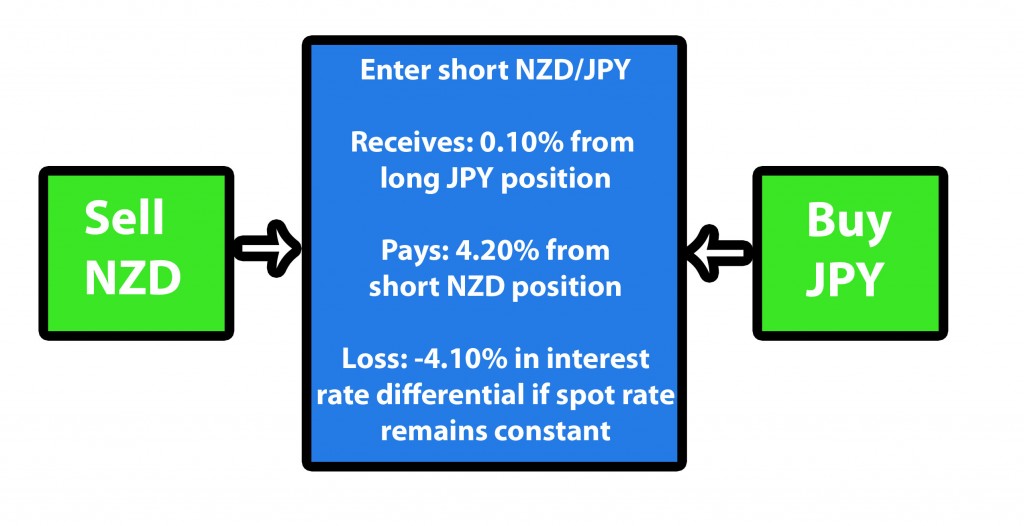 Hopefully by now, you will have grasped the basic idea behind the carry trade. In the next installment, we shall be looking at measuring and managing risk, which is the most important aspect of the carry trade as far as forex traders are concerned.