The EUR/USD declined on Wednesday, falling below 1.06 after weaker than expected Eurozone inflation data strengthened the case for more expansive monetary policy by the European Central Bank (ECB).

The dollar rebounded sharply on Wednesday, reversing the previous day’s drop after payrolls processor ADP said US private payrolls rose 217,000 in November, well above forecasts. The dollar index, a weighted average of the US currency against a basket of peers, climbed 0.4% to 100.20.

A stronger dollar knocked the EUR/USD from the 1.10 region in November, as investors grew more confident that a US rate rise was looming. The EUR/USD declined around 4% in all of November.

Expectations for diverging monetary policy between the Fed and ECB also weighed on the euro on Wednesday after government data showed another month of weak inflation. Eurozone consumer prices rose 0.1% annually in November, unchanged from the previous month and below forecasts calling for 0.2%, the European Commission said.

November’s rate meant it was highly unlikely for Eurozone inflation to reach the ECB’s modest forecast of 0.4% in Q4 as a whole. As a result, the ECB is widely expected to expand the size and scope of its stimulus program on Thursday. Analysts are predicting another 20 basis point cut to the deposit rate, which is already in negative territory, as well as a six-month extension to the quantitative easing program that was originally designed to run through September 2016.

So-called core inflation, which strips away volatile goods such as food and energy, also weakened in November, falling to 0.9% year-on-year from 1.1%.

Low inflation has been a drag on advanced economies for more than a year, as markets grapple with plunging commodity prices. The price of oil has collapsed around 60% since mid-2014. 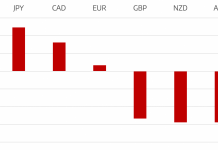 Cromwell FX Market View Big Gains for the US Dollar