European stocks plunged on Tuesday, as global growth woes continued to grip investors in the wake of a new emissions scandal from German automaker Volkswagen.

The pan-European STOXX 600 Index was down 2.7% in the London session.

The FTSE 100 Index in London plunged more than 150 points or 2.5% as all but two its members turned lower.

Germany’s benchmark DAX Index declined more than 320 points or 3.2%. Volkswagen shares plunged 20% in intraday trade on growing controversy over its emissions test-rigging scandal. The globally renowned automaker said Tuesday that 11 million of its diesel vehicles were outfitted to rig emissions test. The company said it would set aside around $10 billion to deal with the fallout of the scandal.

German auto stocks were down across the board Tuesday. BMW shares fell 5% and Daimler AG lost more than 6%.

Asian stocks experienced another day of general weakness, despite a modest increase in the Shanghai Shenzhen CSI 300 Index. The Nikkei 225 in Tokyo fell 362.06 points or 2% to 18,090.21 following three consecutive advances.

US stocks closed higher on Monday after Federal Reserve policymakers said the central bank was still on course to begin lifting interest rates later this year. The comments provided a small reassurance that the global economy was on solid enough ground to support the Fed’s first rate increase in nearly a decade.

US stock market volatility also declined at the start of the week, with the VIX Volatility Index falling to its lowest level since August 20. The VIX, which is also known as the “investor fear gauge,” tracks market volatility using S&P 500 Index options.

Commodity prices were back on their heels Tuesday, as an uncertain global outlook weighed on investor sentiment. Brent crude, the international benchmark, fell $1.12 or 2.3% to $47.80 a barrel on the ICE Futures exchange in London. West Texas Intermediate, the US contract, fell $1.43 or 3.1% to $45.25 a barrel.

After steadily rising over the past week, gold prices were also down. Gold for December delivery, the most actively traded contract, fell $7.70 to $1,125.10 per troy ounce. 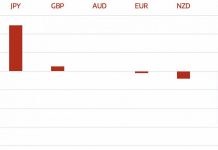