Today, Italian Prime Minister Enrico Letta faces a vote of confidence to keep his beleaguered coalition government in power just seven months after the general election. Uncertainty over Italy’s political future, together with expectations for the ECB meeting this afternoon, have weighed on the euro, lending the dollar some support against a basket of major currencies. 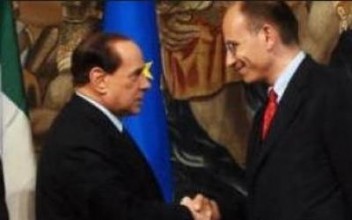 The euro has been given some strength by the increasing likelihood that Italian PM Enrico Letta will survive today’s vote, after Silvio Berlusconi, who prompted his party members to rebel, indicated that he would now be prepared to support Letta.

The markets are expected to be especially volatile today, given the political stalemate in Washington and the prospect of a further standoff over the debt ceiling in two week’s time. Republicans are digging their heels in an effort to water down President Obama’s plans for universal healthcare, while Democrats seem determined to keep these plans intact, even if it means having to borrow more money.

The continued deadlock over the US budget, which has led to the first government shutdown in 17 years, shows no signs of abating as yet. The dollar fell to a one-month low against the safe-haven yen this morning.

One knock-on effect of the shutdown for forex traders is that the non-farm payrolls, a key event in the economic calendar, might not be released this Friday. The US Bureau of Labour Statistics, which publishes the monthly report, has stated that it will not issue anything until the government goes back to work.

The safe-haven yen rose against the dollar, with the dollar slipping 0.6% to 97.305 yen, the lowest point since late August. Having hit an eight month high in the previous session, the euro was down 0.1% at $1.3515.

Meanwhile, the markets have been digesting the minutes of the policy meeting of the European Central Bank this afternoon for signs that the bank will resume its LTRO activities. These involve supplying cheap funds into the bond market in order to lubricate the European banking system, making credit more available. While no plans for this type of monetary stimulus were made at the meeting, it is widely expected that the bank may instigate these later this year. The main takeaway from the meeting is that the central bank intends to keep interest rates at the current low level of 0.5%.