The recent decision by the Securities and Exchange Commission in the US to allow companies to use social media channels to make ‘material announcements’ about the performance of their company, is a clear sign that social media is becoming a major player in the finance and special trading industry.

After an investigation of several months, the Securities and Exchange Commission in the US regulators in late April 2013 stated that companies could treat social media as their legitimate outlets for communication, much like corporate Web sites or the agency’s own public filing system called Edgar. The move that brings this area to a new relevance is that corporations have to make clear and hold that data on which Twitter, LinkedIn and Google+ feeds or Facebook pages will serve as potential outlets for announcements.

In this follow up and in an interview with City A.M. last week, Dinis Guarda, founder and publisher of Traders DNA gave an overview of some of the topics about social media and trading challenges. The main focus of the talk was on how the trading industry is changing with social media.

According to his opinion while social media presents huge opportunities for the finance and trading industry, there is undoubtedly a lot of misinformation and myths that surround its use, and it may be the case that some brokers are merely using social media in an attempt to appear to be keeping up with the times.

Meanwhile, professional traders are finding it to be an invaluable and essential source of news and market sentiment, allowing traders to follow each other in real time. This is all part of a wider trend towards the process of democratising trading using social media, with sophisticated new trading tools and open access to other traders the world over.

While Twitter has, so far, been the main form of social media used by traders, Facebook is also gaining a foothold, with people joining trading networks, special forex trading platforms, through Facebook and sharing information on that platform. Alongside the use of mainstream social media networks such as Facebook and Twitter, there has been a concurrent trend towards the emergence of specialist online trading platforms and communities such as Quantconnect, eToro, Myfxbook, Currensee, ZuluTrade, MeetPips, ibfxconnect, Fxstat, StockTwits and TradeSlide. 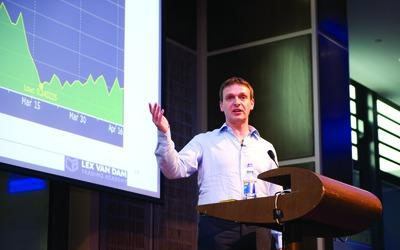 In order to make the most of social media, Forex traders need to do several things. Firstly, they need to observe what the most influential traders and institutions are doing on social media. This allows you to see who is trading better, and by learning from them, you will ultimately improve as a trader.

A good place to start would be to read some of our articles on the biggest Forex influencers, such as the 25 Forex leaders on the Seeking Alpha website and the profiles of thought leaders such as Lex van Dam (pictured talking at last year’s conference) and Francesc Riverola. An influencial person to look in social media updates and best practices the financial and banking industry as a whole is Christophe Langlois the founder and CEO of VisibleBanking.com.

On a more practical way, traders might want to start looking at Twitter or specialist platforms such as StockTwits (for investors in stocks) or Currensee, MyFXBook and others to gain tradable market information in real time. Finally, forex traders should be leveraging the knowledge of other traders, via trading communities such as MQL4.com, Forex Factory, or Nuclear Phynance, to improve their education level.

The City A.M. Active Trader conference will be taking place on 21st June, 2013, at the Grange Hotel Tower Bridge in London, and the social trading masterclass will be held in the upstairs conference room at 12pm. Tickets are available from the City A.M Active Trader website.

Dinis Guarda will be forming part of a Masterclass panel on Social Media and Trading at the forthcoming City A.M. Active Trader Conference. He will be joined by eToro’s Yoni Assai, Tradable’s Jannick Malling, and IG’s David Jones, who will be moderating the panel.